Every month Ossola Skincare matches 6% of our sales with a donation to a Charity of our choice -one that we feel is making an impact.

Our chosen charity this month is the Institute for Justice, a nonprofit, public interest law firm. Their mission is to end widespread abuses of government power and secure the constitutional rights that allow all Americans to pursue their dreams.. 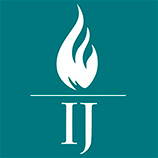 "Amazing products and brand! I rarely give reviews, but this amazing skincare brand really deserves a great review. Not only does Ossola participate in amazing, philanthropic projects, Ossola also has the products to back it up."

"This company shares my beliefs and values. All natural skincare, small business. My favorite product (so far) is the blue spirulina serum. I highly recommend. 10/10"

Our OSSOLA Peptide Pearls are a godsend for under-eye bags and darkness. Within minutes dark circle vanish and puffiness is greatly reduced due to two hardworking peptides Acetyl Tetrapeptide-5 and Acetyl Hexapeptide-8 (sometimes referred to as the Botox® of peptides). Sold in sets of 15 or 30.

Sold out
Featured Ingredients:
Pseudoalteromonas Exopolysaccharides
A biotechnological marine alternative to the well known moisturizer and humectant hyaluronic acid that's created through the careful fermentation of a marine bacterial strain. It is rich in Glucuronic Acid just like it's relative hyaluronic acid and it bring moisture while smoothing out fine lines..
Acetyl Hexapeptide-8
A peptide well known and studied for it's "Botox"-like effects. During clinical trials for Acetyl Hexapeptide-8 participants saw wrinkle depth decrease by 18% over a period of two weeks. Another study found that it significantly reduced wrinkle depth and appearance while bringing significant moisture to the skin.
Acetyl Tetrapeptide-5
A four amino peptide that improves puffy eye bags through its anti-edema (swelling) and anti-glycation (a process involved in skin aging). In a clinic study of this peptide, 70% of participants saw an improvement in under-eye swelling by week two, while 95% saw an improvement before the end of the study.
Customer Reviews
based on reviews
Write a Review
Write a Review
There are no customer reviews yet.
Thank you for submitting your review. Once it is approved, your review will show up in the list of reviews.
Submitting your review failed. Please try again.
Dimethicone, Dimethicone/​Vinyl Dimethicone Crosspolymer, Cyclohexasiloxane, Cyclopentasiloxane, Isostearyl Isostearate, Bis-PEG/​PPG-14/​14 Dimethicone, Stearyl Dimethicone, Octadecene, Water, Citric Acid, Sodium Salicylate, Pseudoalteromonas Exopolysaccharides, Acetyl Tetrapeptide-5, Acetyl Hexapeptide-8, Phenoxyethanol, Fragrance
*ORGANIC/*BIOLOGIQUE
Note: Ingredient lists are subject to change from time to time due to product innovation and formula improvements. Please check online for the latest ingredients.
How Do I Use It?
Take a Peptide Pearl and break off the tip using your fingers or a appropriate tool (such as tweezers), empty the formula onto your finger or applicator and apply gently around the eye area.
Ophthalmologist Approved